There have been no moon sightings anywhere and we are completing 30 days of Ramadan.
Eid will be on Thursday, May 13th inshallah.

Due to the restrictions around congregating in present circumstances, it is apparent that many Muslims will not have access to an Eid prayer with congregation.

The view of the Ḥanafī school is that one who misses Eid prayer with the main congregation will not make up for it; whether alone or in another congregation.  They deem that Eid prayer is only a devotional act when its conditions are fulfilled and thus may not be offered individually or at home.
The only option for someone who has missed the main congregation is to find another main congregation, otherwise there is no qaḍāʾ (make up prayer) for it.
However, such person may offer 4 rakaʾāt of ṣalāt al-ḍuḥā or ṣalāt al-ishrāq (the forenoon prayer) which are nafl and not a replacement for Eid.

It is reported from Ibn Masʿūd Allah be pleased with him:

“One who has missed Eid ṣalāt should pray 4 rakaʿāt.”

There are two positions in the Mālikī school.  One is the same as the Ḥanafī school, as mentioned above.[vi]  The second position is that it is preferable to make up the prayer individually, as is the position of Imam Shāfiʿī mentioned below.[vii]  The inclination of some Mālikī jurists is that the person should make up the prayer individually, while others have allowed for a person to pray with their family members at home.  In either case, there will be no khuṭba.

The Shāfiʿī and Ḥanbalī schools maintain that it is sunna for a person who has missed Eid prayer with the main congregation to offer their own prayer in the manner of Eid ṣalāṭ without a khuṭba. They present the hadith of Anas (Allah be pleased with him, who lived at Zāwiya, several miles out of Basra.  When he missed ṣalat al-ʿīd with the main congregation, he would gather his family and have someone lead the prayer, without khuṭba.  This narration is mentioned in the Muṣannaf of Ibn Abī Shayba (5803), and Imam Bukhārī has related is as a taʿlīq (without chain of narration).  Therefore, adherents of the Shāfiʿī school may offer their own individual ṣalāt.

[Al-Khirqī said in his Mukhtaṣar]: One who misses Eid prayer with the imam should pray four rakaʿāt as a nafl (supererogatory prayer).  If he wishes, he may pray these in sets of two with a salām in between.

[Ibn Qudāma then elucidates]: The summary is that there is no qaḍāʾ for one who has missed Eid prayer with congregation, as it is a farḍ kifāya and has been carried out by others who have sufficed it.  However, if he wishes to perform qaḍāʾ of it, he has the option of offering four rakaʿāt [together] with one salām, or [in sets of two] with two salāms.  This has been narrated from Ibn Masʿūd (Allah be pleased with him) and is the position of Sufyān al-Thawrī. The reason is the ruling passed by Ibn Masʿūd, “One who misses Eid should pray four rakaʿāt, and one who has missed jumuʿa should pray four rakaʿāt.”  It is narrated from ʿAlī (Allah be pleased with him): If I were to instruct someone to lead [Eid] prayers for those two weak to attend, I would instruct them to lead four rakaʿāt.  Both these narrations are reported by Saʿīd [b. Manṣūr in his Sunan].  Imam Aḥmad said that this [ruling] is supported by the narration that ʿAlī (Allah be pleased with him asked a man to lead the weak people with four rakaʿāt without a khuṭba.

To summarize, the Ḥanbalī school gives the following options to someone who has missed Eid prayer:

a)      No qaḍāʾ for the missed prayer, but instead offer four rakaʿāt of nafl, altogether or in sets of two with salām in between.

b)      Voluntarily offer qaḍāʾ for the missed prayer in one of the two ways mentioned above.

Those who are not able to join main congregation have the following options:

a)      Ḥanafī, and one position of the Mālikī and Ḥanbalī schools:
To pray 4 rakaʿāt of nafl, as per the verdict of Ibn Masʿūd (Allah be pleased with him).

b)      Another view of the Ḥanbalī school: Voluntarily offer four rakaʿāt qaḍāʾ for the missed prayer in one set of four or two sets of two rakaʿāt.

c)      Shāfiʿī  position, another view of the Mālikī and Ḥanbalī school: Pray their own individual Eid prayers with the extra takbīrs, as per the personal practice of Anas (Allah be pleased with him).  Though not explicitly mentioned in Shāfiʿī texts, Ḥanbalī and Mālikī texts do allow praying this in a congregation [with family members].

Our preferred view is to follow the ruling issued by ʿAbdullah b. Masʿūd (Allah be pleased with him), who has a distinguished rank amongst the jurist Companions (fuqahāʾ of Ṣaḥāba).  His ruling was issued in the form of a fatwa for the masses and three of the four schools converge on it, while the narration of Anas (Allah be well pleased with him) reports his personal practice, one that is not related from other Companions.  The guidelines for this prayer is mentioned below.

As for gathering small numbers of non-family members in homes and holding ‘mini-congregations’ of Eid, there appears no basis for this in the sunna, and this practice should not be adopted.

Guidelines for Nafl Prayers at Home on Eid Morning

Time Window: Between 15 minutes after sunrise until midday (when sun reaches its zenith)

JUMA SALAAT
There will only be one Juma Salaat at Masjid Alhakeem
1:30 Azaan
1:45 Khutba

We do not currently provide funeral services due to lack of facilities. However please click here to get more information from other organizations that provide this service.

Masjid Alhakeem is honored to be associated with Masjid Alwadood in Orono which has a facility that can host your family or community occasions. Please click here to get the details on how you can book your next event in Orono.

Everyday after Maghrib Salaat, short learning sessions are held for teens & adults. Subjects include Tajweed, Imaan and it's importance, Seerat of the prophet (PBUH) & Healthy Living and Diet

If you are looking to have a marriage performed at Masjid Alhakeem or you would like to have our marriage officer perform your marriage or son or daughter, click here.

Classes will be held from 12:30pm to 1:30pm on Sundays. The Topics being covered include Qur'an Translation, Fiqh of everyday life, Rewards for everyday Deeds and Hadith Memorization

Your support is needed to help maintain the Masjid 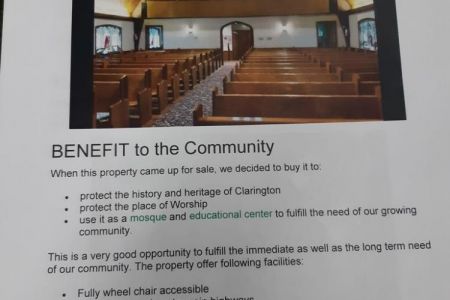 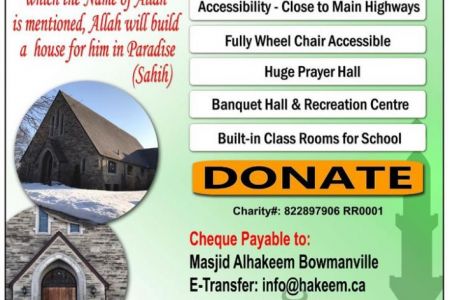 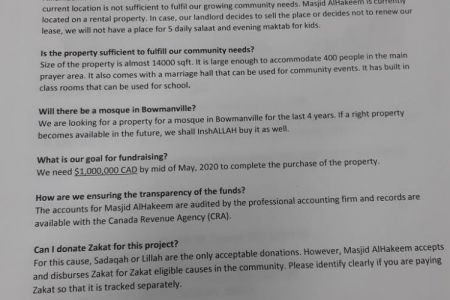 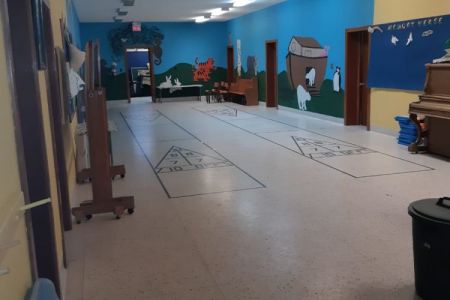 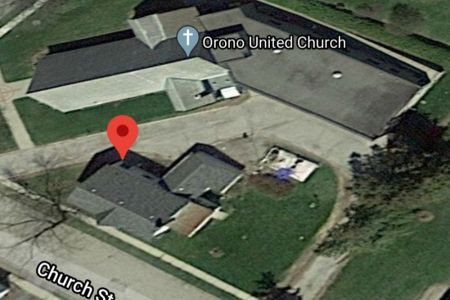 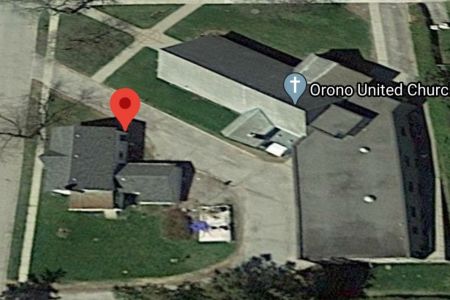